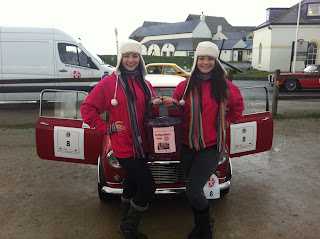 In December 2012, my sister Elise (21) and I (23) decided to tackle the toughest classic car rally in Europe, HERO’s Lands End to John O Groats reliability trial, to raise money for The Pink Ribbon Foundation.  In the weeks before the event we had to purchase 31 maps covering the entire length of the UK and plot 84 points on them, we also took the car we would be competing in on a test drive as we had never driven a classic car before and had to get used to the lack of luxuries like power assisted steering and ESP.
Despite arranging to arrive at Lands End on the Thursday before the rally, getting to the start of the event was a challenge in itself, we had booked trains down to Penzance  but due to heavy rain and floods there were no services running past Exeter St Davids, luckily we managed to scrounge a lift off one of the organisers who came back to pick us up.

The Friday started bright and early as we had to put the 1964 Mini Cooper S we were competing in through scrutineering to check that she was suitable and ready to be put through her paces over the next four days. We were then given the ‘ok’ and our rally plates (lucky number 8) so that we could go sign on and receive the first route instructions.  We then took the maps and instructions through to the bar at The Land’s End Hotel and sat down to start plotting, thinking that having completed the Duke of Edinburgh’s Award this would be easy. We couldn’t have been more wrong, we had to learn Herringbones, tracings, linking spot heights by certain compass directions and that reading the instructions in full is very important!

Once we had plotted what we hoped was the route for the first 10 hours of driving we headed out to set the tripometer in the car, we drove the measured mile four times to check that our trip was accurate enough then made our way back to the hotel to get ready for the pre event evening meal to officially meet other competitors and organisers. 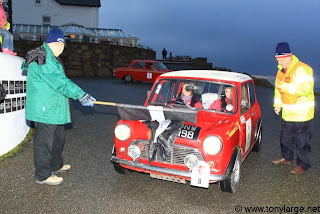 All too soon it was Saturday Morning and we were out warming up the car and syncronising our watches to rally time to start on the biggest driving adventure of our lives.

7.52 am the Cornish Flag was waved and we began the first test around the peninsula of Land’s End with nerves and excitement running high, this became prominent as we approached the first cone off the start line and Elise directed me to the left of the cone to which I replied “which way is Left?” but we completed the first test correctly with no major penalties and proceeded onwards through Cornwall and Devon tackling various tests and regularities on the way.

By early evening we were driving over the Severn Bridge into Wales and before long we made it to Cardiff Gate Services off the M4 for an evening meal, a much need cup of coffee and route instructions for the dreaded Welsh night section. 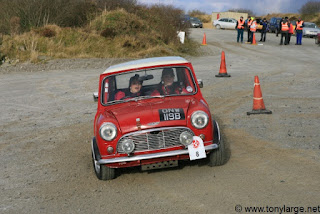 We managed to visit every timing point but to say we didn’t get lost would be far from the truth, but then we met a lot of other crews going in every direction possible at the junctions. At one point we realized we had taken a wrong turn and needed to go back the way we had come. Needless to say we were on a very narrow lane with no turning points so I started a three point turn but misjudged the width of the road, my front tyres slipping off and getting stuck in the mud. Elise jumped out to push to no avail but then another crew arrived also going the wrong way (lucky for us) and both of the competitors were out of their car and pushing us back onto the road before I knew what was happening.
The temperature was dropping and the early hours of the morning were slipping by as we headed North to Llangollen and our beds. It was 4 am when we finally crawled into bed knowing we had to be up again by 7.

The many alarms we had set to wake us up brought us to consciousness with a jolt and we ate our breakfast in a daze but then we received more route instructions and had to get plotting before we started day 2. Our aching legs and arms were forgotten however when we got the results from the day before and we were running 17th out of 60 cars, great for two novices and a real boost for the day.
Our high didn’t last very long, as we rounded a corner just 5 minutes away from the hotel the mini began choking and slowed to a stop. The fuel gage hadn’t been working and we had run dry, fortunately we had two cans in the boot filled with emergency fuel but unfortunately the corner was full of spectators who all witnessed us, two females, run out of fuel, embarrassing!
The route then took us up through Cheshire and on to Northumberland, and we were really starting to get the hang of the tests and regularities, but the weather wasn’t going to stand for that and driving became very interesting as the roads and car parks turned to ice rinks, to the extent that the organisers HERO had to cancel a few of the tests. 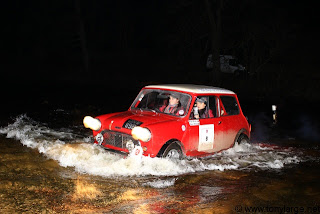 One test they didn’t cancel was a ford which Elise and I were rather nervous about as we had never driven through one before especially not in a very low to the ground mini. With Elise driving we arrived at the ford test and with no other crews waiting ahead of us turned around the corner to face what I can only describe as a river!

There was no time to panic as the Marshals had counted us down and we were descending into the water, keeping the revs high but trying not to create a bow wave Elise motored through the ford and out the other side where she had to stop on the bank, turn the engine off, and then hill start her to drive up to the finish. The spectators and Marshalls erupted into applause as nobody, including ourselves, thought we would make it through.

It was then a short drive to Slaley Hall and a final test before we could relax at the hotel although it was an early night for us as we were still exhausted from the previous day and this would be the last chance to sleep in a bed. 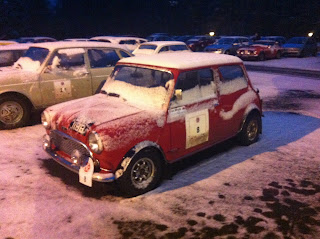 We awoke to a covering of snow, and the poor mini was feeling a bit worse for wear after the ford and took ages to start, the electrics were damp and she was very cold.  Reports started to come back of very icy roads and accidents were happening all over the place. Once she had started we slip, slided through the first test of the day which was epic fun and then went on our way fish tailing down lanes and looking out for black ice.

Our electrics went again as we arrived at a passage control but a very helpful crew got us going and offered to follow us incase it happened again which considering we aren’t the fastest drivers was extremely kind of them but then disaster struck as a block of ice hit the sump guard and knocked the exhaust off. The competitors assisting us were lying on the ground trying to determine what we could do but they had already delayed themselves quite a bit, though they still managed to go on and win the rally! 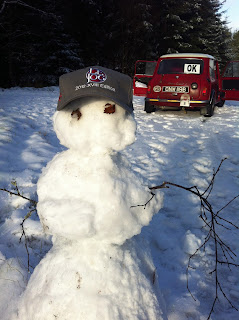 We were in the middle of Kielder Forest with no mobile phone signal so we had to hope that the mechanics on the event came along this way, in the meantime we made good use of our time and built a snowman.

Soon enough the Mechanics arrived and had the car jacked up in no time, they even let us sit in their comparatively modern van with the heating on so that we could feel our fingers and toes again.

They fixed the exhaust back on and we were back on route to Scotland the only problem now was that we were about four hours behind schedule and with the event constantly moving onwards without excessively breaking the speed limit we would never catch up, so we made the executive decision to cut the route and meet them at Fort William that night.

This would have been the sensible option had we not broken down again on the top of the Cairngorm Mountains, in the pitch black with no heating and off route, we thought it was all over and had little hope of continuing.
Suddenly a landrover driving past reversed back to us and asked what the problem was, turns out they knew one of the other competitors on the rally and miracles of miracles they were driving a mini. These lovely people fitted our car with some spare parts they had and managed to get us going. I don’t know what we would have done if they hadn’t come along when they did.

On arriving at Fort William both Elise and I were tired and a little depressed at our progress so far but everyone was so positive and motivating that after a great dinner (and for some of us a little snooze curled up on the floor, Elise) we got back into the Mini and began the last stretch right through the night and the entire length of Scotland to reach John O Groats. 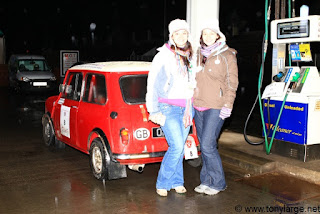 We continued on through blizzards and what seemed like endless roads making good time until we reached a petrol station at Brora, not wanting a repeat fuel incident just two hours from the finish we filled up the car and with 40 minutes before we had to leave we did what any normal person would do at 5 am, we both fell asleep in the freezing cold car, parked up in a petrol station to fuel ourselves for those last few miles to our destination.

As the sun rose on Tuesday 4th December we drove through Wick and out onto the open roads as we approached the finish line, a feeling of euphoria rising out of the extreme tiredness, with the sea all around us as the thoughts running through our minds were ‘have we actually made it?’ ‘have we done it?’

But it wasn’t until the car was across the finish line that in dumb shock we realised we were the youngest ever all female crew to compete and finish Europe’s toughest classic car rally.  That in just three and a half days we had driven 1,492 miles, through snow, ice, rain and sleet and had to deal with so many new driving experiences, it was definitely the most exhilarating challenge we had ever faced. 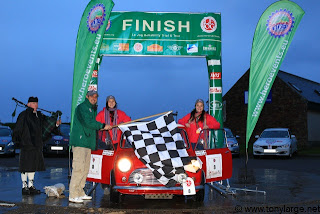 We would like to say Thank you to all the organisers, officials, marshals, mechanics venue owners, sponsors, householders and competitors for making this a superb event, we couldn’t have done it without any of you.

Now we have had a taste of it and are completely hooked, we hope to compete in the HERO cup in 2013 and have already entered the Poppy Rally in Ypres, Belgium in March, which will be the first time either of us drive on the wrong, or right side of the road.  As well as The Pirelli Classic Marathon from Ypres, Belgium to Cortina, Italy, in June. We want to get more young people like ourselves into classic car rallying and if you wish to support us in our endeavors please don’t hesitate to contact us.

Here is the trailer for LeJog http://www.youtube.com/watch?v=YKxTY_nkDxE
Posted by Whyte Sisters at 12:22 No comments: