We had such a great time competing in the HRCR Championship last year that we decided to enter again, once more hiring out HERO’s Arrive and Drive Triumph TR4. Unfortunately we can no longer be classed as Novices, so having registered reluctantly as Experts we tackled the first round of the year, The Tour of Cheshire. 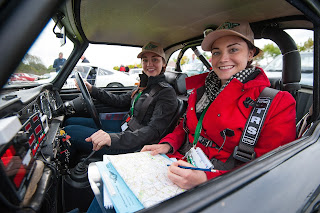 The first event back after a few months off is always difficult, trying to get back into the groove that we had worked so hard on the previous year and shaking off the cobwebs on the first few tests is to be expected. Luckily I think a lot of people found themselves in the same situation on this event. The Tour of Cheshire took place on the 7th of March 2015 and as well as all the great competitors we had the pleasure of meeting last year we also had the added pressure of competing against our Dad, who wanted to show us how it should be done. Although someone had a great laugh in seeding him one place behind us on the road.

Cheshire is a lovely county and The Knutsford and District Motor Club had put together a great rally for us to enjoy, but my favourite part was the regu-test at Delamere. It is set out exactly like a test but with average speeds to obey like a regularity. Definitely a highlight for us, especially when half way around Elise says she has no idea where we are timing wise and we end up getting bang on our second for two controls! Even with a sticky beginning due to lack of practice, we managed a very respectable 15th overall and 3rd in our Expert class, a great start to the year and HRCR Championship.  The bonus had to be beating Dad though, although the car he was in wasn’t as competitive as ours.

The next round took place on Sunday 29th March and wasn’t as successful for us, we had travelled up the country for The North Yorkshire Classic and despite the event being run really well, we managed to pick up nearly ten minutes in penalties just on the regularities. This was aided by a classic trick during a plot and bash where we were told to go through a few points on the map and not to go through the last one, in our haste we plotted to go through all the points missing a control in the process. We did manage to match our seeding on the event with a 29th overall and fifth in our class. It was a shame that our dad couldn’t compete on this one as he may have beaten us.

A few weeks later we were back up North for the Ilkley Jubilee Classic, one of my favourites from the previous year due to the fantastic open and flowing roads.  With a few of the test venues being the same as the year before, this gave us an added confidence with the event.  A few of the seriously muddy tests slowed us down but Elise pulled out the stops on the regs with the majority of timing point under two seconds we finished 21st overall and 2nd in class. Once again we had been competing against our dad but unfortunately they had clutch problems and so finished 24th overall.

Saturday May 16th saw us competing a little more closely to home on the Leukeamia Historic Rally around the roads of Chepstow. The challenge for me on this event was the tests, having gone over the allowed time last year, I had a personal aim of beating myself this year. I did have a funny five minutes during one of the tests where I was adamant that Elise was telling me the wrong way, she was of course right and I was wrong, we laughed about it afterwards but I probably cost us a good five seconds.  I tried to make up for my error with the last test and succeeded in being just 7 seconds over the bogey time, on the exact same test a year ago I went over time on. On a high from that last test we were bouncing off the ceiling when we found out the results of the day had us at 9th Overall and 2nd in class, a top ten finish. We finished just a few places in front of our dad who had a new navigator for the event, so they pulled over to let us past . . . . . mid test . . . . and we were running in front of them! 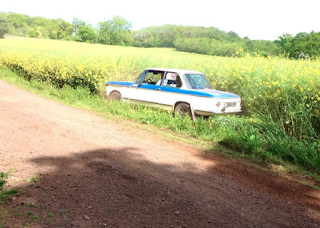 Our last Championship event together was the Hughes Classic on the 31st May, for a change we weren’t seeded according to our experience or how well they think we will do but according to age of the car, it was very strange to be running car Seven on the road. We had a great start, with the first two regularities we dropped 5 and then 6 seconds respectively. We did however have a nightmare on the last regularity of the day when we had to reverse nearly a mile up a very twisty single lane track after meeting another car coming the opposite direction, despite a rather hairy drive to the next control we dropped 64 seconds but lucky for us, the Hughes Classic have a Joker that cancels out your worst lateness at a control. This meant we went on to finish 8th Overall and 2nd in Class.

Unfortunately we missed out on the next few rounds of the HRCR Championship due to work commitments, I managed to squeeze in the final round on September 5th, The Vale of Clwyd Classic which definitely seems to be the hardest of the HRCR rounds. With Elise unavailable to compete I put out a call for help, Niall Frost came to my aid to navigate for me as my unwilling victim, I mean, co-driver. 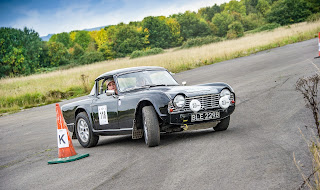 I was really nervous about the event, especially as I had been working on a ship for the previous two months so the last thing I had driven was a 1934 Austin  Seven back in July, coupled with a new navigator that I had mever met before, I was rather worried.  Of course, I was worried over nothing, Niall was fantastic and really put me at ease, we took it slow on some of the more slippery tests just to be on the safe side, the most important thing was to finish.  We managed 35th Overall and 5th in class which is my best result so far on that event, a huge thank you to Niall for putting up with me.

As I had only managed six out of the nine HRCR Rounds I was delighted when I found out that I had finished the Championship first in my class and 10th overall! Elise was also very surprised to learn that she had come 3rd in class despite only completing five of the rounds. The HRCR Championship rounds are our favorite weekends of the year, with great competition and a lovely family-like atmosphere, we just wish there were more rounds so that we could compete more often.  Dad didn’t have a lot of luck this year, maybe next year he will show us how it’s done. 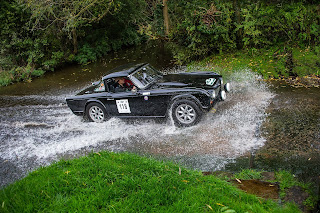 As always a huge thank you to everyone who marshals, organises, photographs and cheers us along on the events, we couldn’t do it without you!
Posted by Whyte Sisters at 18:01 No comments: