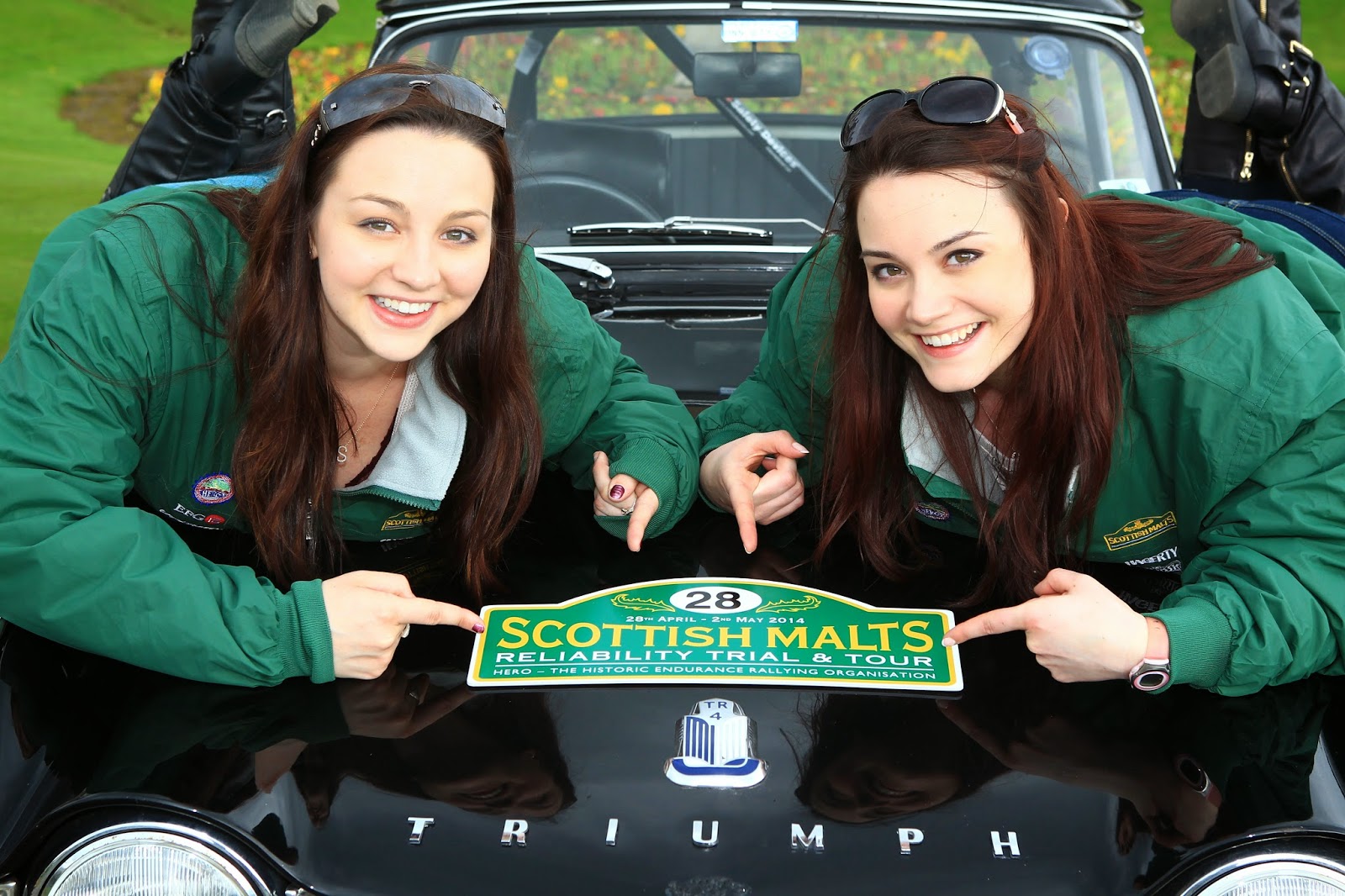 Having saved up for weeks, we were very excited about competing on our first all-tulip event. We arrived on the Saturday evening and stayed in a B & B in Kinross ready for scruitineering and signing on Sunday morning. The first shock to us was the pile of route books, map books and test diagrams that we were supplied with as well as a fantastic rally jacket each and cap. So it was time to get colouring and go through all the instructions to make sure we understood everything. 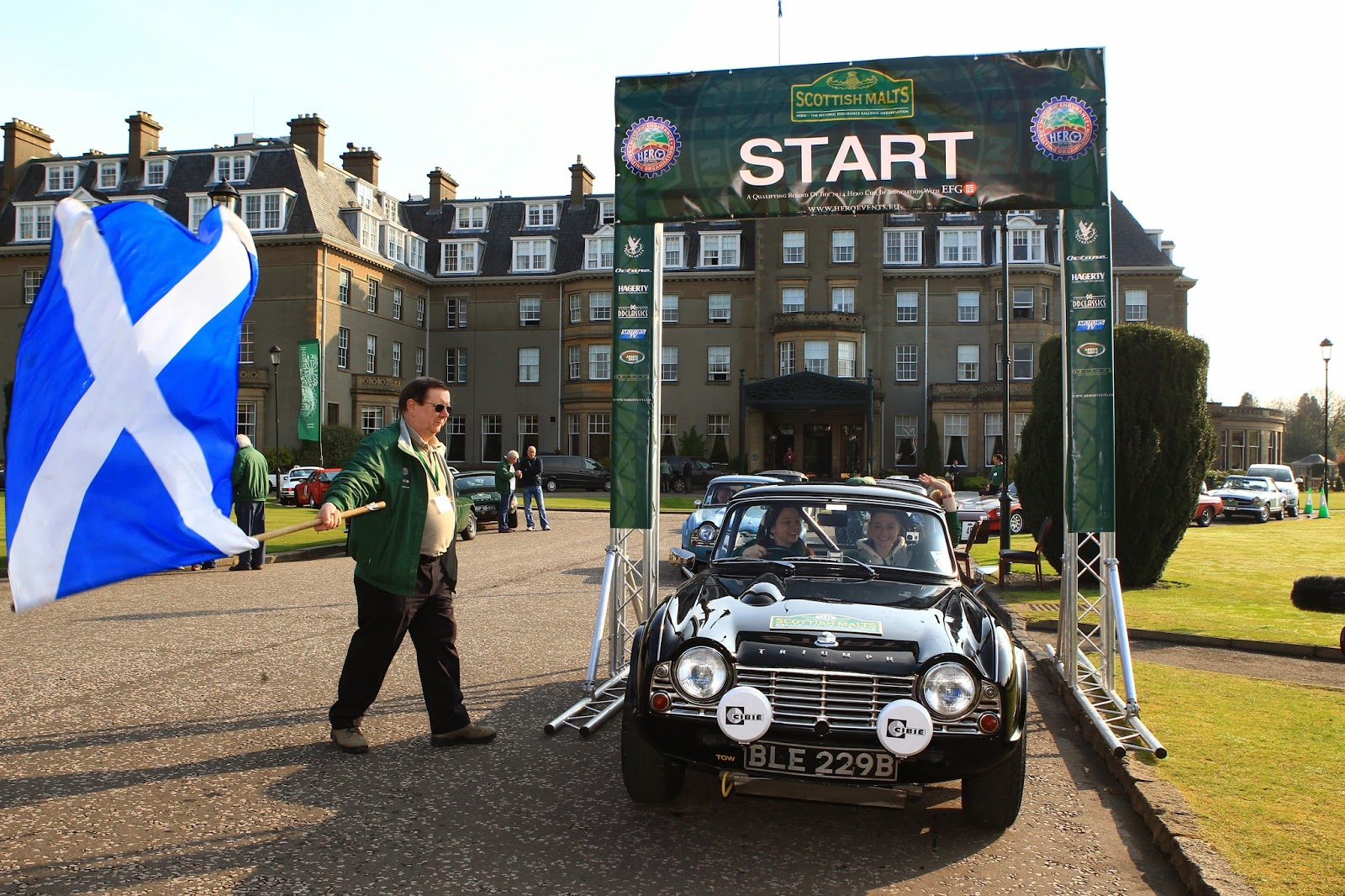 The route from Gleneagles started with a practice regularity, which gave us the chance to get into the Tulip directions and timing, it went very well we only dropped one second on the second timing point, a fantastic start although with a result like that we were gutted that it didn’t count. The next regularity started well, cleared the first timing point but then we met a car on a lane, I reversed and pulled in, she would not pass, I reversed further and pulled in, she still would not pass, 200 meters later and two minutes dropped we managed to pass. Then came the almighty race to catch up time before seeing a marshal, luckily the speed was set at 18mph for that section so we ended up just seven seconds late at the timing point and five early for the last, not quite as good as the practice. We then headed north to Crieff, the home of the “Famous Grouse” distillery, which was a passage control, before turning west to travel to the Trossachs National Park, another regularity saw us drop just four seconds on the middle of the three timing points, then it was onto the first test. It was quite a tight test with a 180 around a cone that we wouldn’t have made round without reversing but we were just 17 seconds slower than the fastest in our class, considering two of those are Porsches and a very fast mgb, this wasn’t bad at all. 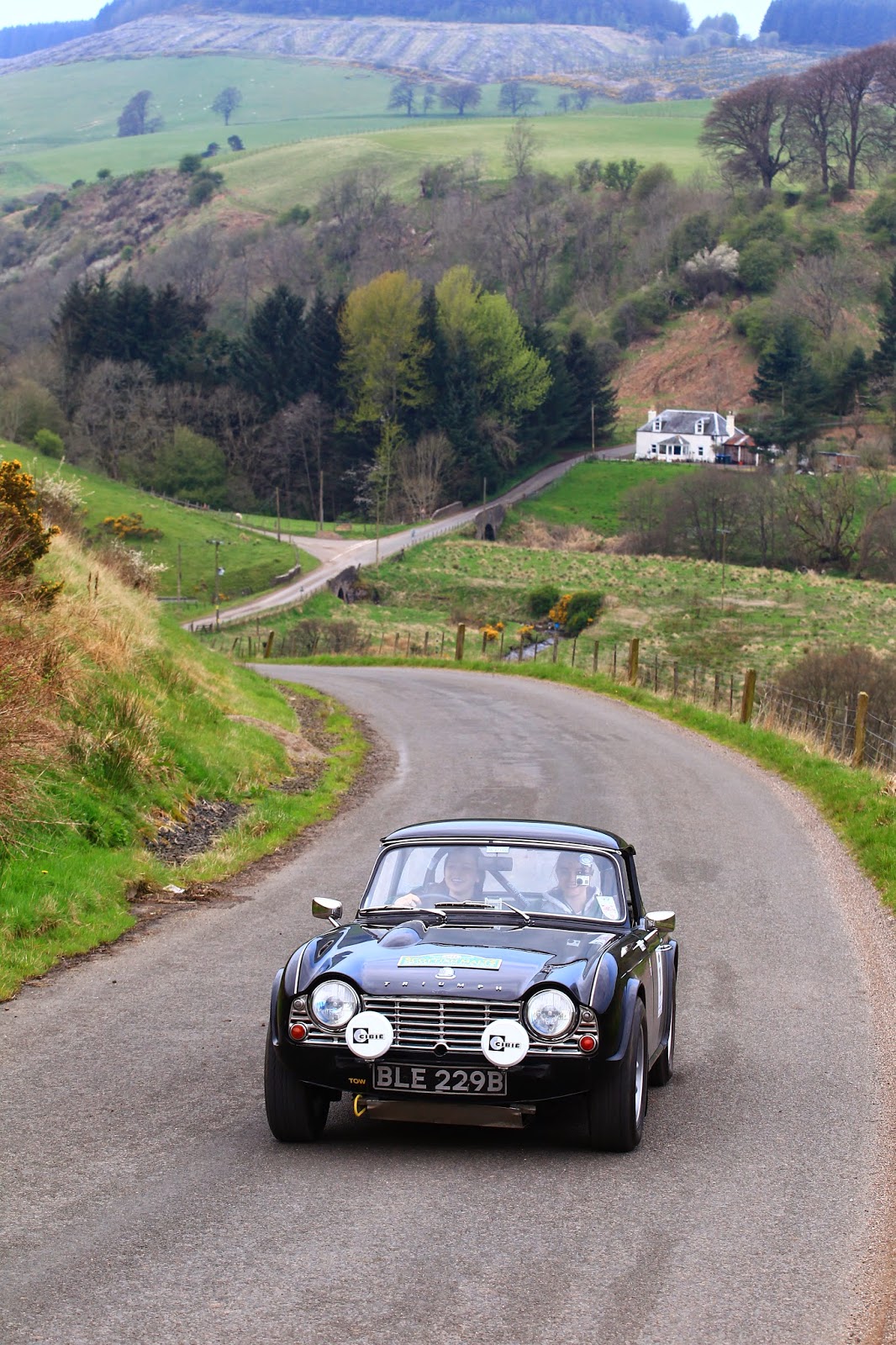 Two more regularities got us closer on to Loch Lomond for the end of day one, we picked up three seconds on the first and nine on the last. Finishing off with a complex test on the shores of Loch Lomond, which we really enjoyed and came in just 12 seconds slower than the MGB of Mark and Sue Godfrey and second fastest in our class. Results came in with us 12th overall and 2nd in class an amazing start to the rally.

A repeat of yesterdays last test started the morning, which we completed two seconds faster and then we headed north, although the first regularity was cancelled due to herd of 40 cows wandering down the road. It was onto Rest and Be Thankful the famous hill climb and a challenging test. It proved a bit too challenging for me as I stalled off the start line, but got it back together quickly to finish the rest of the test just 13 seconds over the fastest in our class, being a hill climb the Porsches definitely had the upper hand. 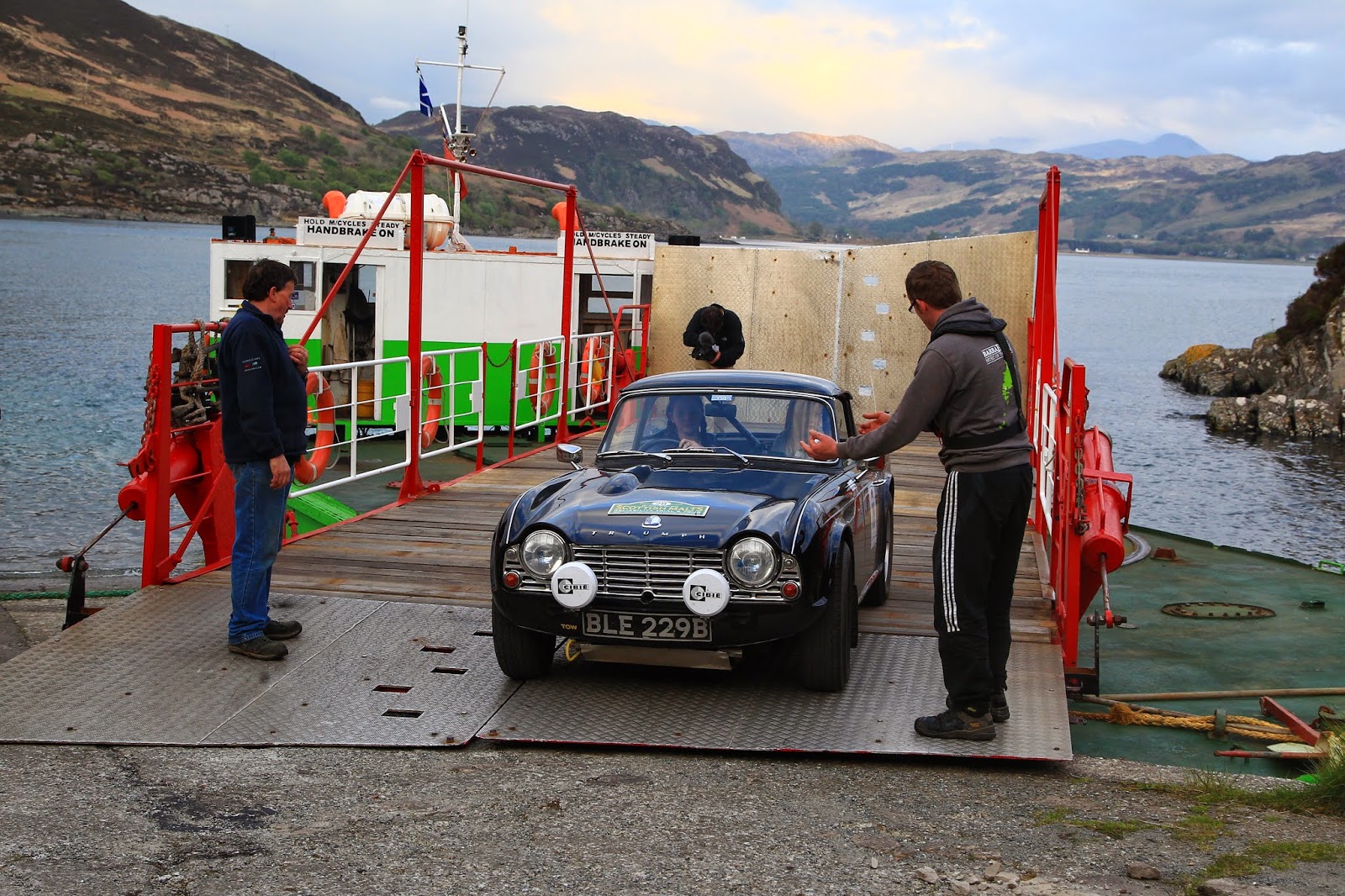 From the “Rest”, through Inveraray and passing just north of Oban, scenic roads interspersed with regularities and driving tests took us to Fort William. The regularities all went very well as we dropped 6 seconds, 5 seconds and 2 seconds over three regs. Unfortunately we were getting thrashed on the tests, we had two airport tests that afternoon the first we were 19 seconds slower and the second 16, this caused us to loose our medal status and drop down the leaderboard. From here the route continued NNE before turning WNW in the direction of Glenelg and a wonderful ferry crossing onto the Isle of Skye via the last operational turntable ferry in the world. That night we were 19th overall and 3rd in class.
Wednesday April 30th – Day 3. Isle of Skye to Strathpeffer 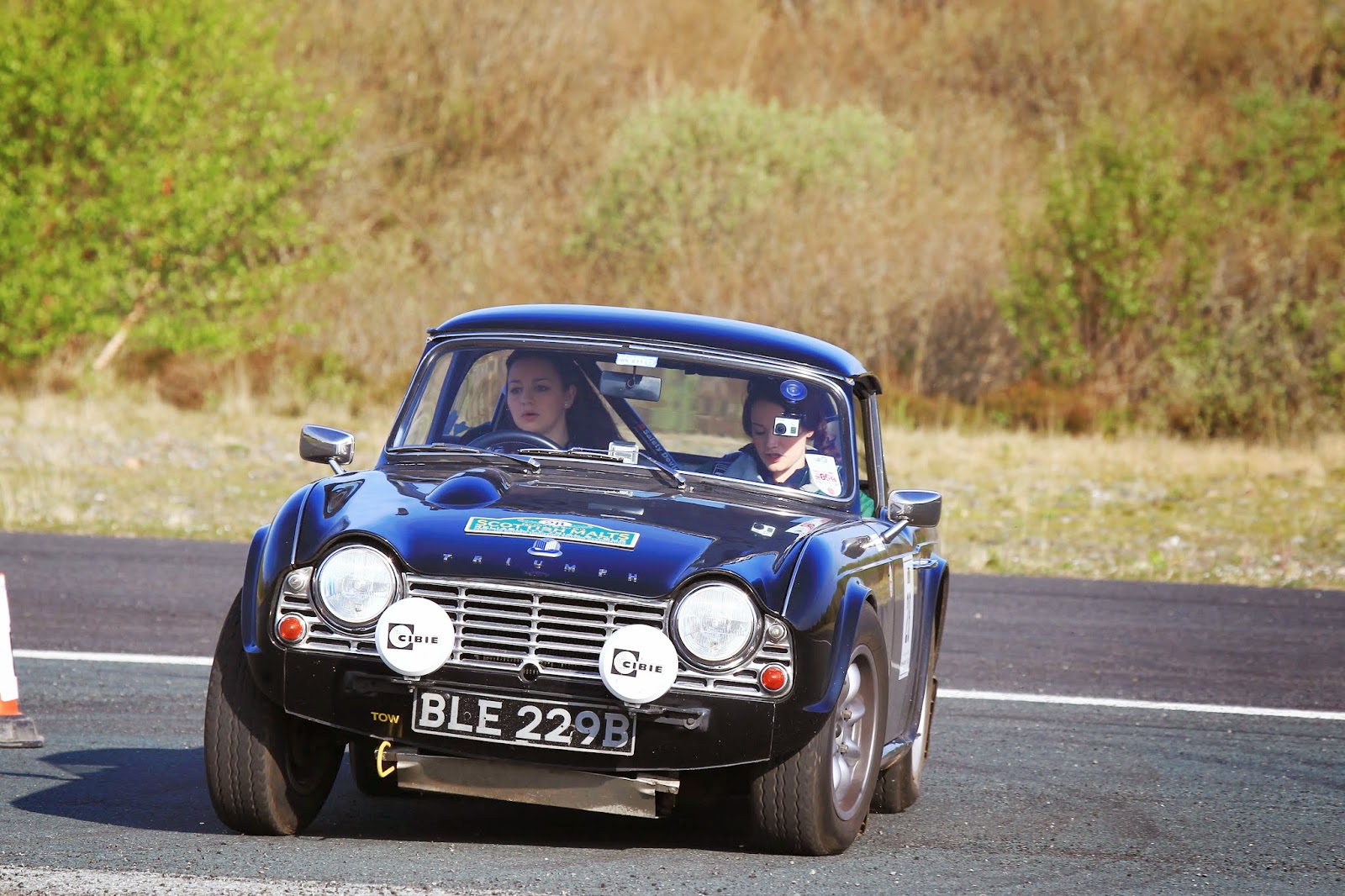 Wednesday morning began with a test at Skye airport which contained some long straights so the other cars in our class had the upper hand, I was very pleased with our 12 seconds penalty. Leaving the Isle of Skye behind we continued North via some spectacular scenery and driving roads over the Kyle of Lochalsh before dropping down into Plockton on Loch Carron for the second test of the day, we were only 9 seconds slower on this one and the marshals informed us that we did it in the exact time of one of the Porsches, result! 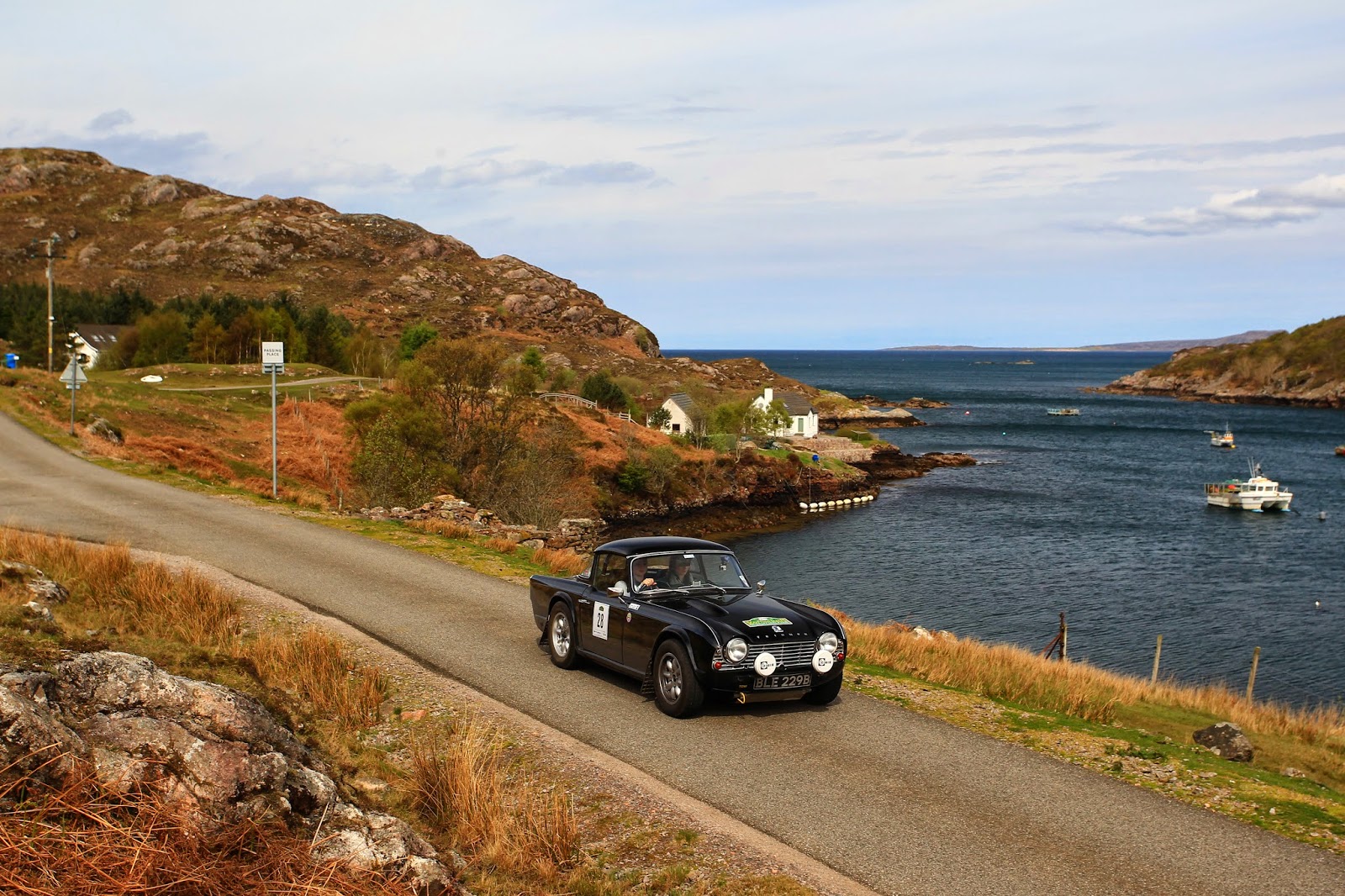 The route then made its way up the west coast, with a regularity along my favourtie road, the Pass of Cattle to Ullapool, we drove this road in the dark on LeJog and it was definitely scarier this time round because you could see the drop inches from the road. Knowing the road really helped us on this reg as we knew that at the top there were loads hairpins, we took a gamble and ran early at the beginning praying that there would be no marshals. It really paid off and despite a campervan trying to scupper our plans we dropped just one second at the first timing point and two seconds on the other two. No time to celebrate though as it was straight onto the next regularity, this one went right along the coast and would have been great if not for a Land Rover with a trailer that we met just before a control, he cost us seven seconds and we picked up another one at the last timing point.
A code board section started the afternoon, we had five codes to collect along the route which of course Elise navigated perfectly which led us to a lovely coffee halt. All that remained was a long regularity with four timing points, we picked up 11 seconds over all four.
It was on to Strathpeffer and the much needed overnight halt. Results came in, and we’d climbed up to 18th Overall and still 3rd in class.
Thursday May 1st – Day 4. Strathpeffer to Strathpeffer (the Speyside Day) 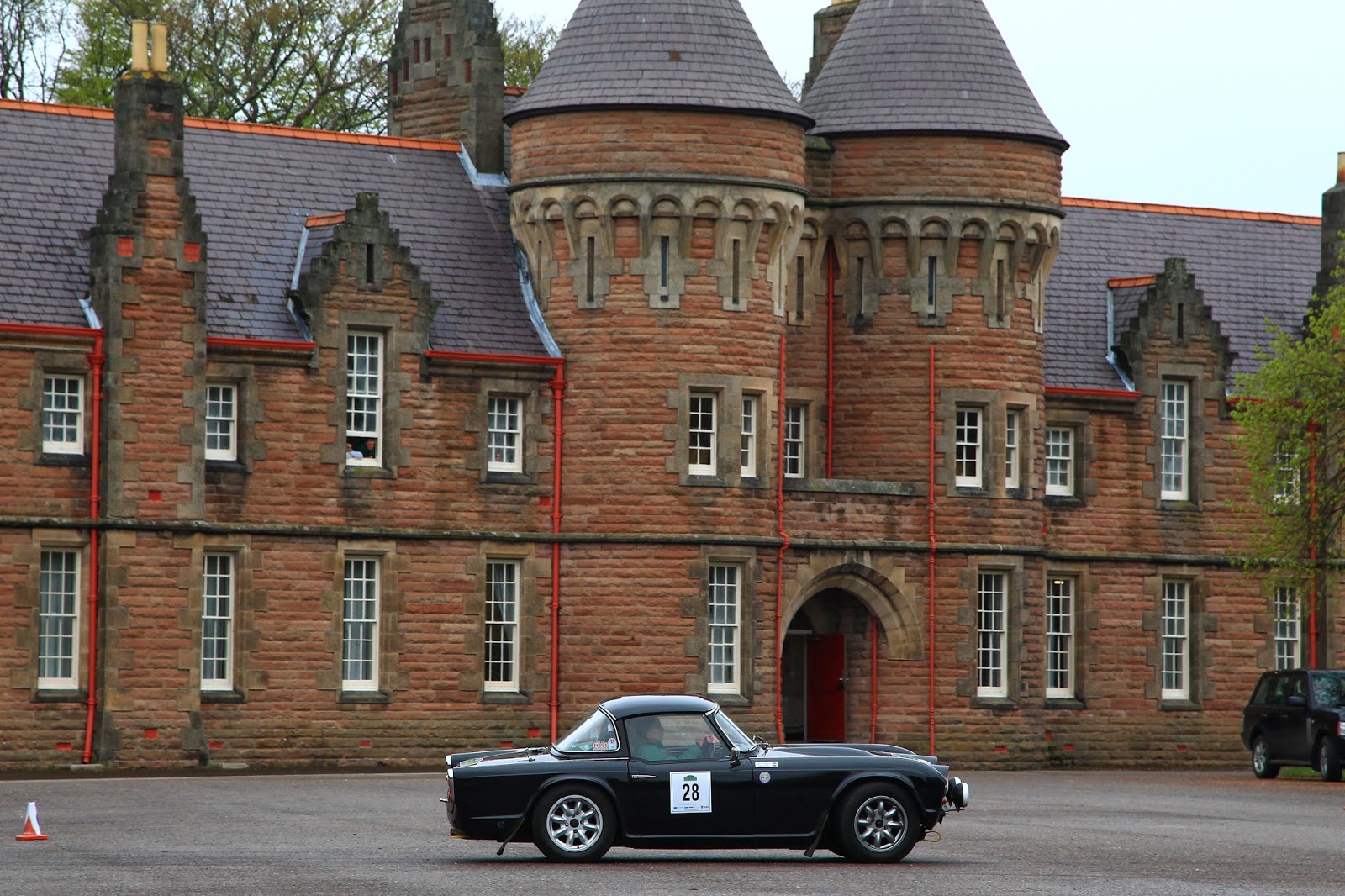 Exploring Speyside was on the agenda today; famous for whisky such as Macallan, Aberlour, Balvenie, Glenfiddich, Glenlivit & many many more! First though a regularity, which turned out to be our best to date, picked up one second at each of the first two controls, then cleared the third and last controls. This was followed by two tests, one at Leys Castle, a downhill test with stop astrides, we were only 12 seconds over bogey and within gold standard. It was a great feeling because it shows that we are improving all the time. Two more regularities followed this, and we picked five seconds on both. The next test was at the Macallan distillery, a great test venue, following a track with a slight incline and a few stop astrides, I took a 90 degree bend slightly cautiously as the surface was loose so we were 14 seconds over the fastest in our class. 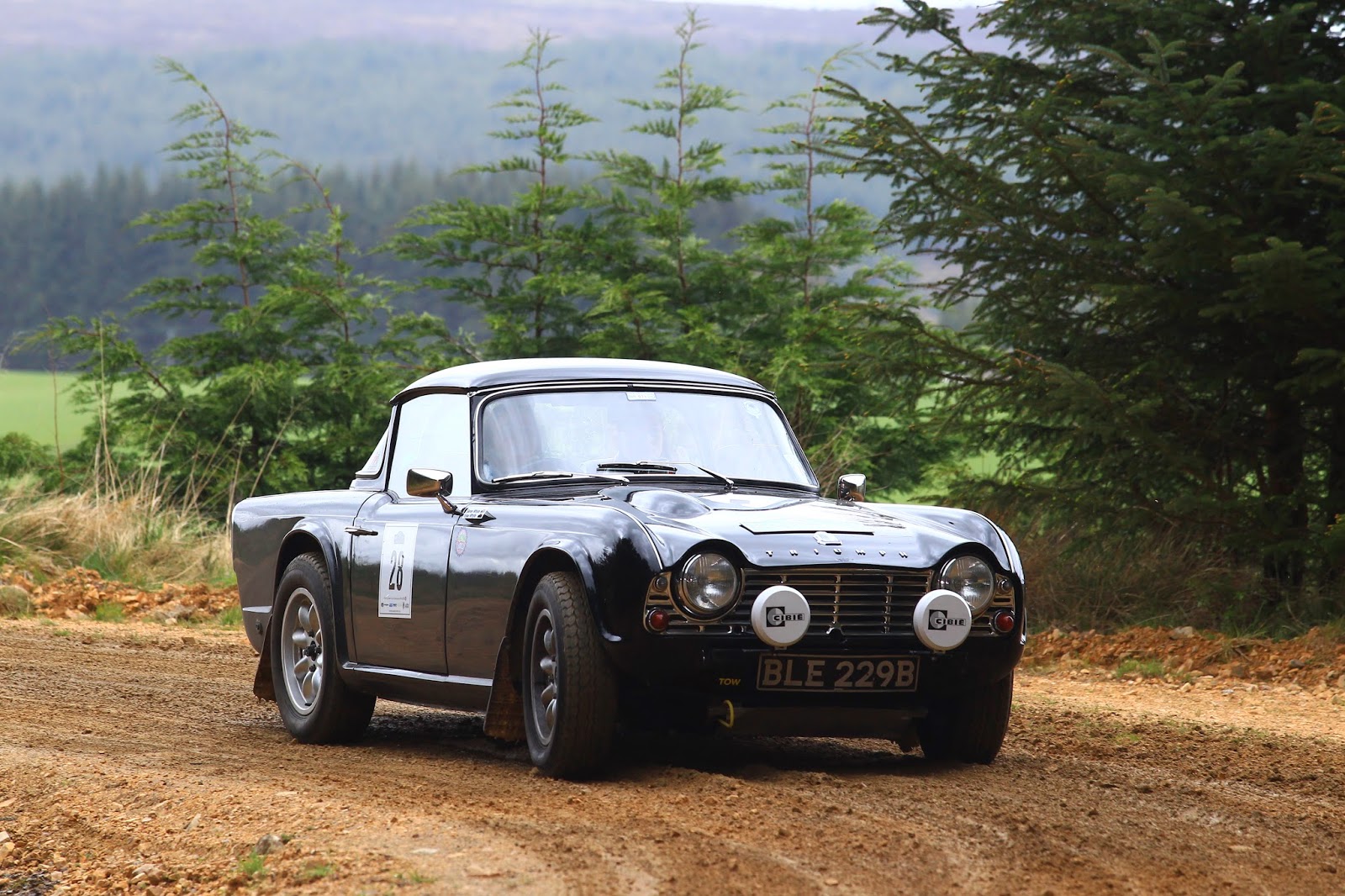 Then it went downhill, with a short regularity on private land, the track was sand very windy and undulating, I pushed as hard as I dared but we were dropping seconds by the meter, 18 seconds late we got the the only control. I need to practice on loose surfaces so that I can keep up on these sections.
All the regularities had been jogularties up to this point, where you get given set distances and exact times, the marshals will always be at one of these points although you never know where, but HERO set a practice regularity ready for a difficult one on the last day. We were given speed tables and had to run off the trip, Marshals could be at any kilometer marker. It was great fun and after the practice Elise and I have had on the HRCR events we found it quite easy so were really looking forward to completing the regularity on the Friday.
To finish the day we had another Jogularity where we picked up just three seconds over four timing points a great end to the penultimate day. Results showed we had clawed back 17th overall and 3rd in class with just 27 penalties between us and 18th overall, 4th in class and the 18 behind them is 19th overall and 5th in class. This was to be the battle of our class! 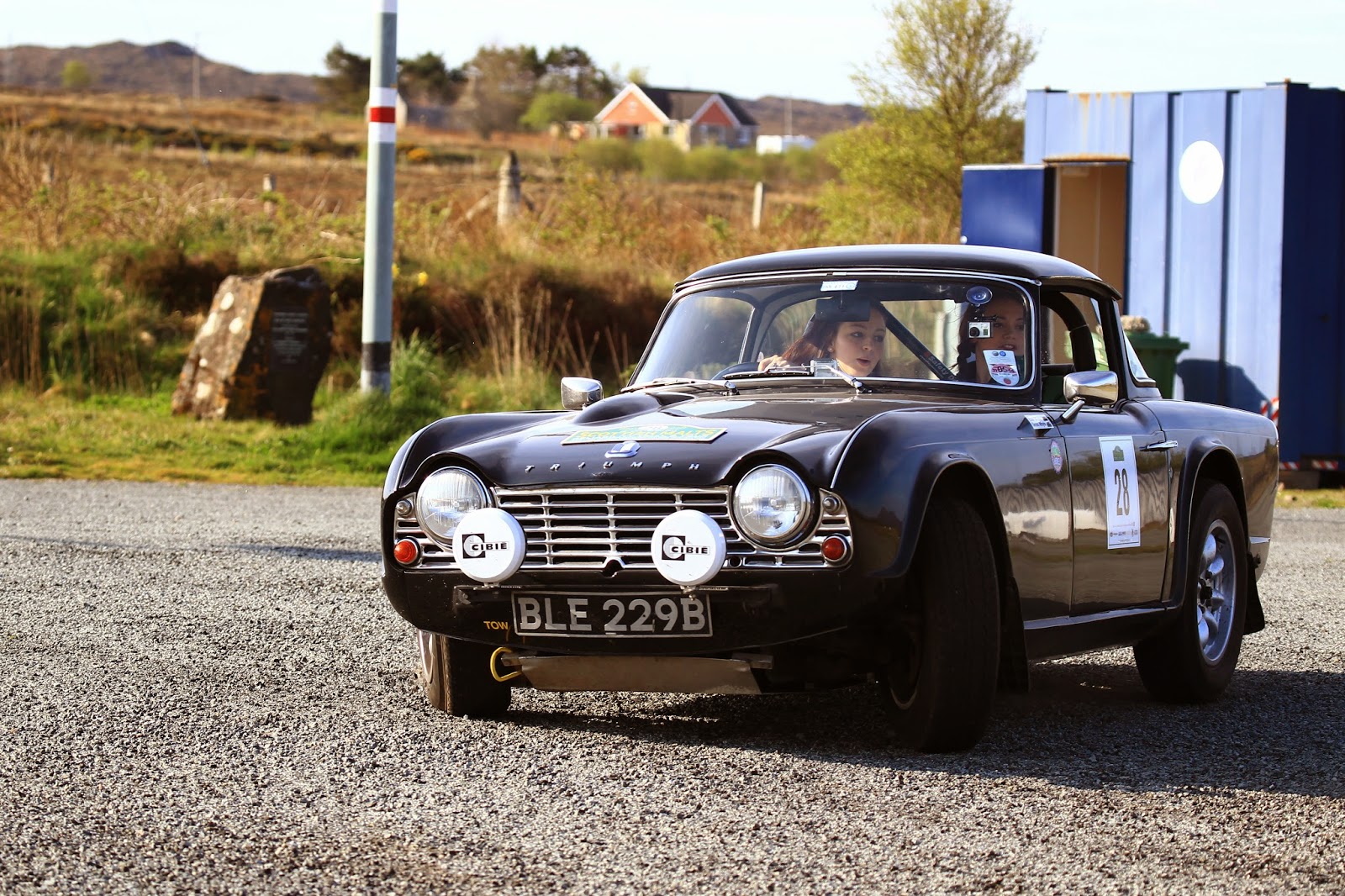 The final day took us past Inverness through the Glenmore Forest Park to Braemer and Glenshee before heading south to Gleaneagles. Of course it wouldn’t be a rally without some drama, first regularity of the day 8.30 am on the lanes of Scotland, we arrive behind the school bus, that stops picks up kids and then drives onto the next house with no passing places! We were well and truly stuck! Eventually we got past and although we were over a minute down we drove as fast as we could but luck was not with us, the timing point was just a few corners away so we dropped 31 seconds which would drop us below 18th overall and 4th in class, disappointed we headed to the next timing point, hit it bang on the second but it was little consolation.

A repeat of yesterdays Leys Castle saw us one second faster than our previous attempt, then a fantastic regularity which we picked up three seconds. To finish the day and the event we had the regularity off speed tables and Marshals would be at any half-kilometer or kilometer out of the 12 km length.  I was very impressed with Elise’s navigation as we hit the first timing point bang on, and then only dropped four seconds at the two remaining controls, which brought us to Kinloch Rannoch. 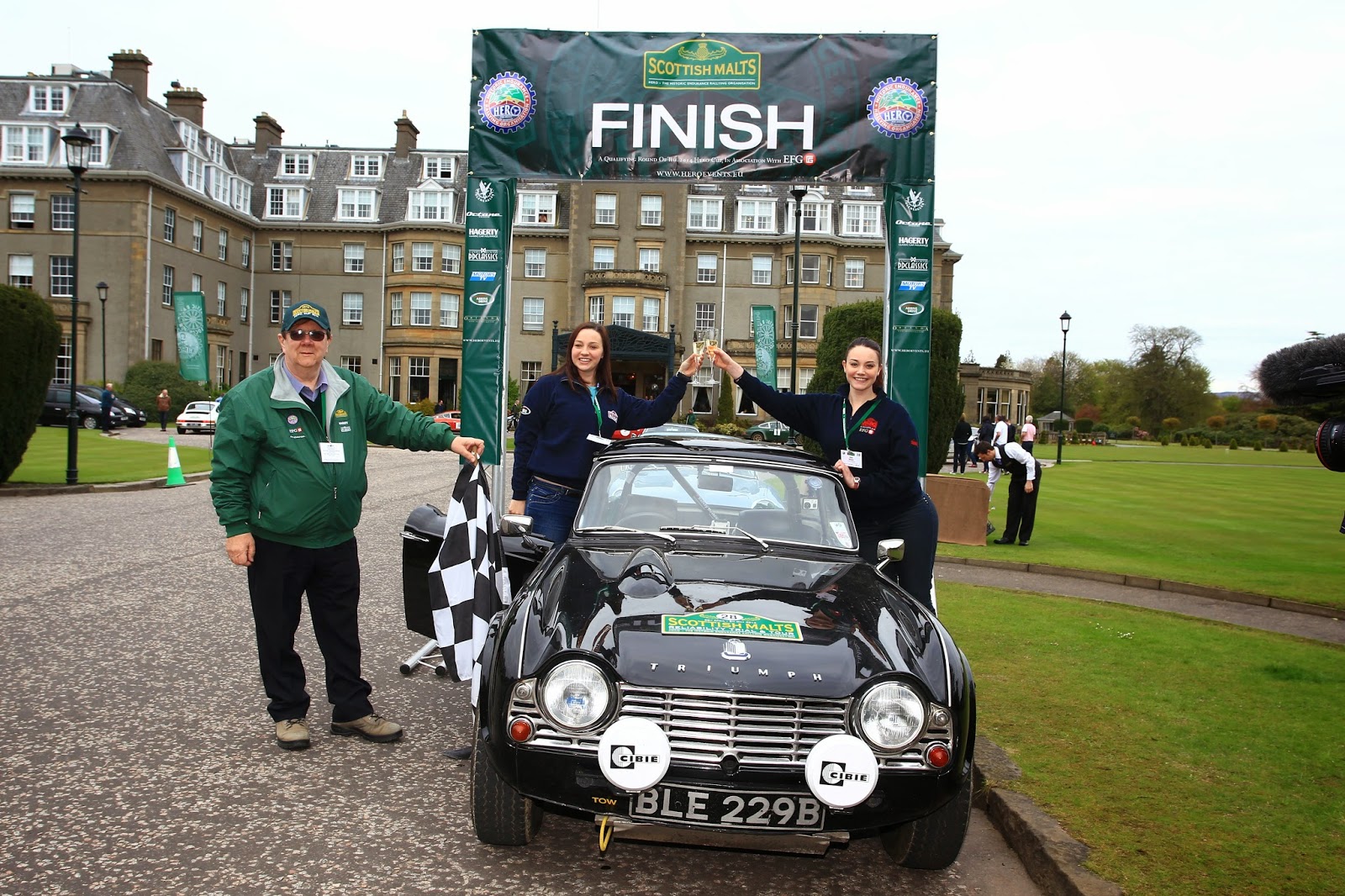 From there it was a straight forward drive back to Gleneagles, whilst we debated over how many penalties we had picked up and although we were sure we had dropped one place, had we done enough to stay in the top twenty?

A gala black tie awards dinner finished off the whole event in spectacular fashion and due to overall winners not being eligible for class awards we won 2nd in our class and 17th overall. Turns out the last regularity had caught a few competitors out.
As always a huge thank you to everyone who made the event possible, marshals, officials, mechanics, and competitors (for the entertaining competition)

Photographs are credited to Tony Large and the video clip is by TV AC, Thank you all! x x 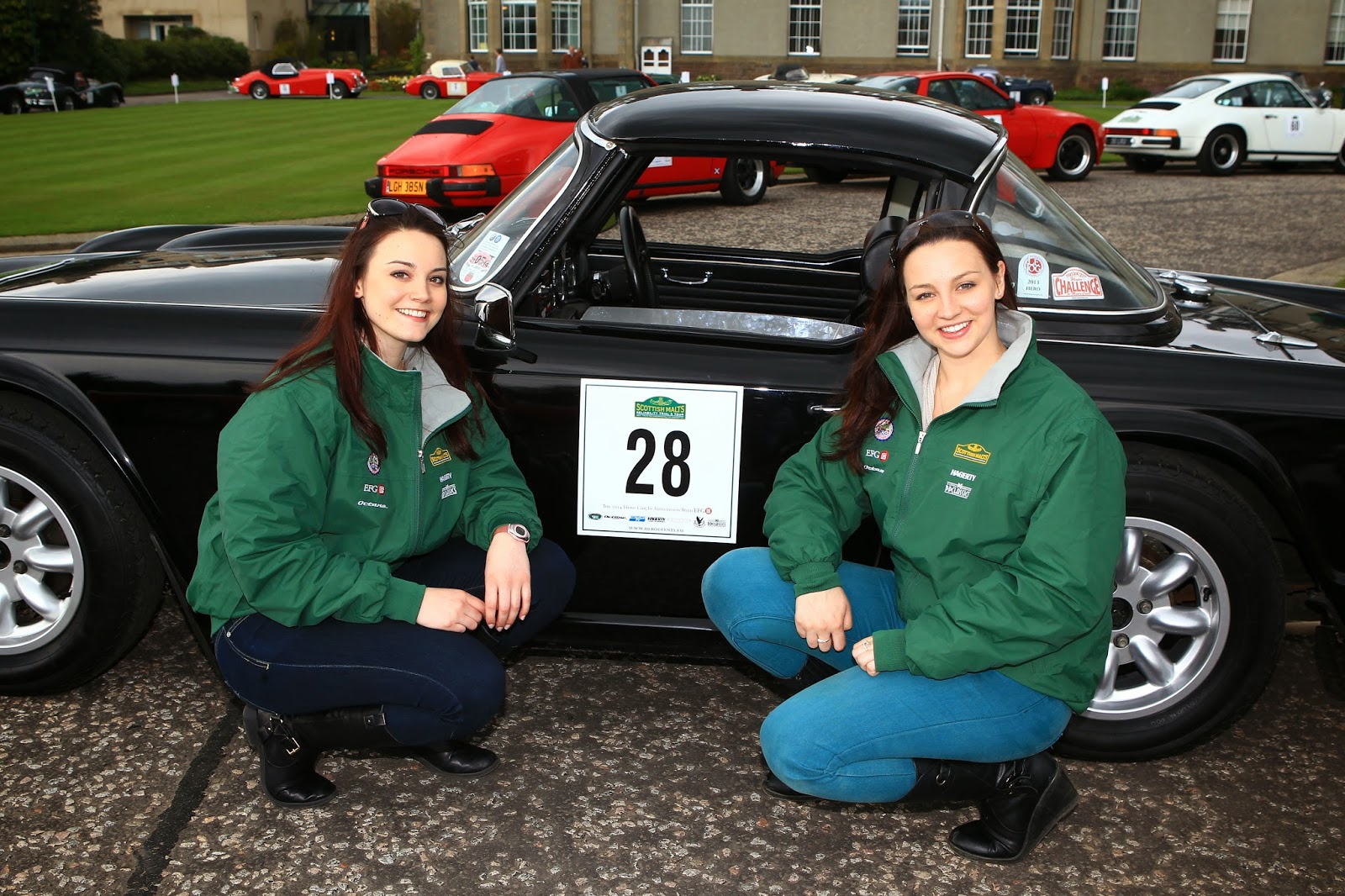