Having been working on a ship for a week, Elise and I were very excited to be dry-side and heading up North for the Ilkley Jubilee. However, from Plymouth this meant a seven-hour drive, meeting the TR4 at the M5 Services and a lot of I-spy! 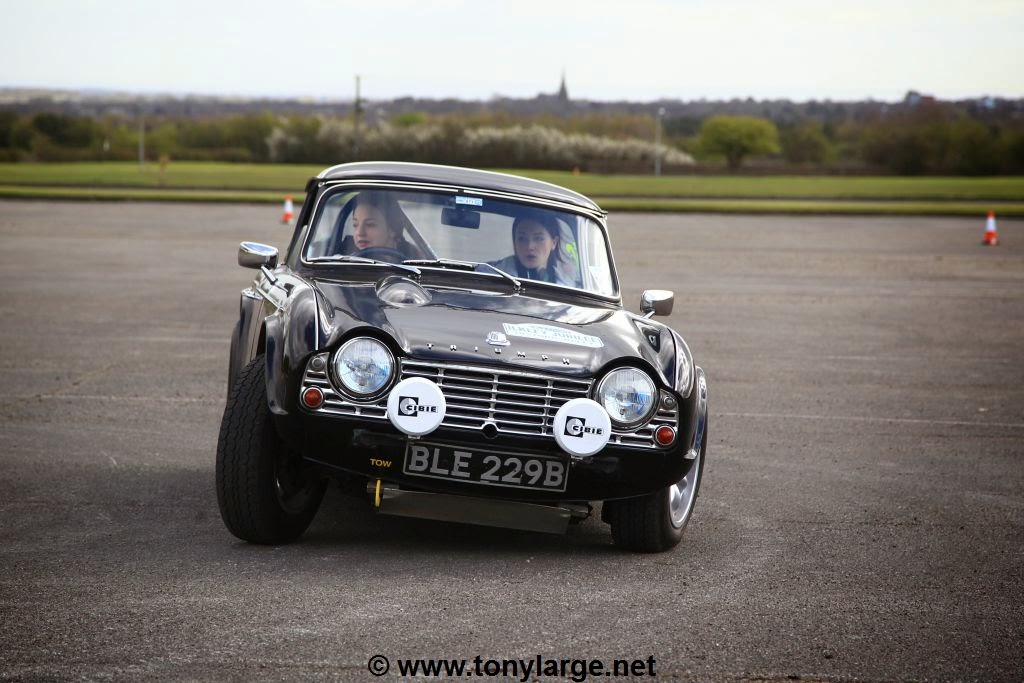 Despite towing the trailer we made good time and even got a chance to check into our hotel in Harrogate before making our way over to Scruitineering and signing on. With our early arrival we decided to complete the measured distance first to calibrate our trip, this quickly turned into a bad decision as we got stuck in terrible traffic halfway around, eventually making it back to the start with us, and the car, a little bit grumpy! We only did the distance once but the trip seemed to be spot on so we headed over to the garage where they held Scruitineering and by this time a good crowd of classic cars and their competitors had gathered, so we joined the queue and caught up with crews known to us and met some new faces too.

Once the car had successfully passed it’s checks, signing on was very quick and we returned to our hotel to begin colour coding and plotting the route. It didn’t take too long to complete, as the road book was in the form of Tulip Diagrams and four of the six regularities were ‘Plot and Bash’ regs. After our performance on the North Yorkshire we were rather nervous to face this type of navigation again. An early night was on the cards and we were tucked up in bed by 11pm.

A mixture of nerves and excitement proved very detrimental to my early night, after four hours of staring at the ceiling, I finally drifted off to sleep 03.30am. We both woke up early so that we could double check the trip before our noise test and the start of the rally. Needless to say I was exhausted and just hoped that Elise had got a good nights sleep so one of us would be on good form. 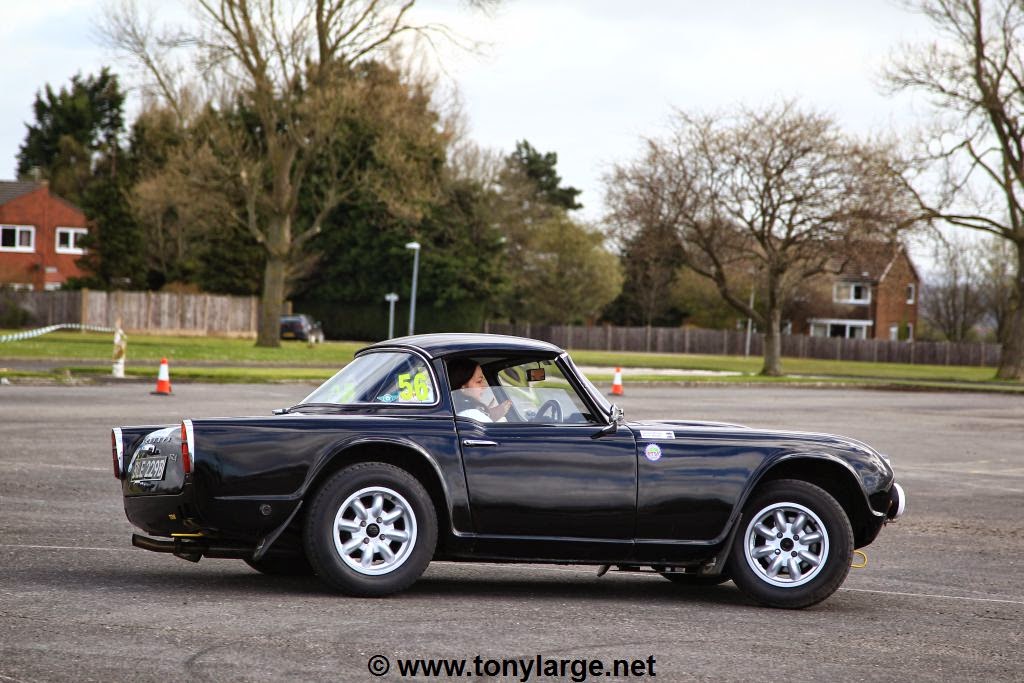 We ended up re-calibrating the trip as it was a little off, which may have been down to the traffic we encountered the day before, this made us a couple of minutes late for our noise test and didn’t bode well for the rest of the day. It is amazing what a sausage sandwich and a cuppa can do, within twenty minutes we were ready to go, although the nerves were still present.

9.56 was our start time and it was straight into a regularity, this was definitely a shock to the system. The only advantage being that it was a Jogularity, with tulip diagrams and the correct distances, which is technically easier than other forms of navigation.  What really caught us out at the first timing point were two passage controls before it around triangles and, although we ran early to account for this, we still came in 45 seconds late. We pulled this back a little on the next two timing points with a 16 seconds late and 7 seconds early. 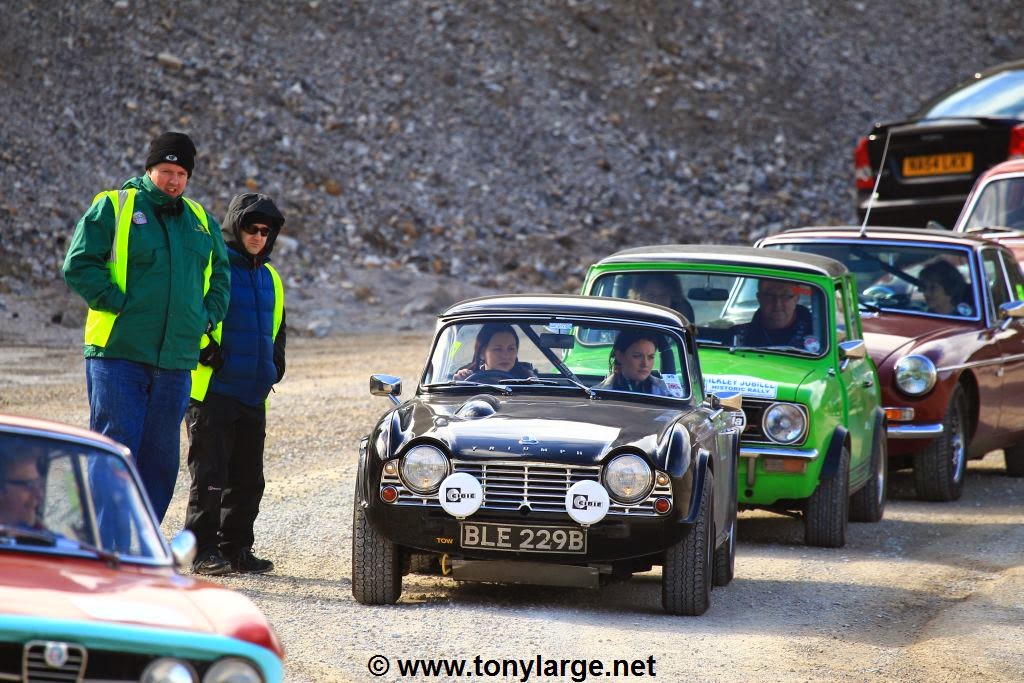 Then it was time for three tests in Hildebrand Barracks, all on tarmac. I was a little worried with one of the instructions ‘free turn’ as I thought the area would be tight and that other competitors would pull out a Jay turn. However there was a lot of space and we completed the whole test in 22 seconds over bogey, faster than half the field competing!

The second test was pretty straight forward with another ‘free turn’ and a slalom up and back through five cones, again we came in 22 seconds over bogey. I didn’t manage the third as quick but with no reversing and some great 360’s around cones we did manage it in 37 seconds over. My luck was not destined to last.

It was the onto the next regularity, the first of the Plot and Bash regs, the Marshals counted us down to our start minute then handed over the instructions. As I glanced over before driving off all I saw was a squiggly line but Elise translated it into a tracing and plotted it on route perfectly. The regularity began as a pleasant Sunday morning drive on the beautiful Yorkshire roads, but we weren’t the only ones out to enjoy them, so were the bikers, the cyclists and the tourists. Baulking was guaranteed, so our times over the six timing points varied greatly, 51 sec at the first then 0.07, 0.58, 0.09, 0.13 and 0.14. 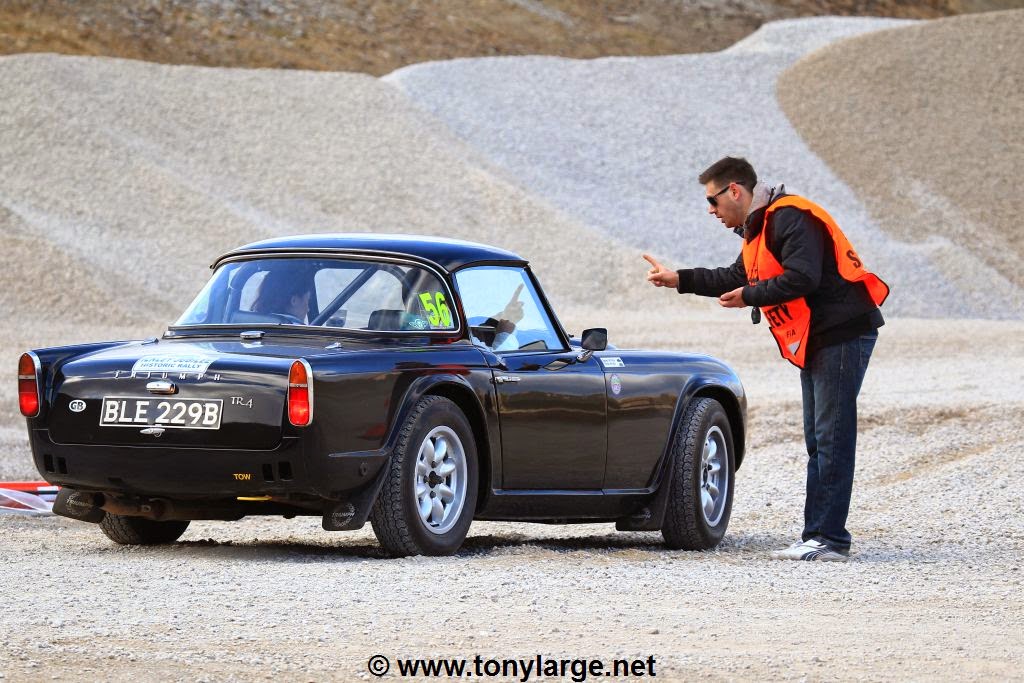 Hawpike farm was the location of the next two tests, the first was a rather steep hill climb and although we were just 22 seconds off bogey most crews were a lot faster. The next one was where my tiredness really came into play, a longer test over a farm track and a field. Most crews cut straight over the field reducing their times drastically, not realising this was a viable option we followed the track around the edge to finish 52 seconds over bogey, slowest car on the test.

Slightly downhearted we began regularity three, which we had plotted the night before, the instructions were to go through exactly 54 green cycle dots. Unfortunately the first timing point was on a lovely open road and downhill, I couldn’t help myself, we were 24 seconds early, but I regret nothing! The following timing points we were five seconds late and then three seconds early, which we were very happy with. 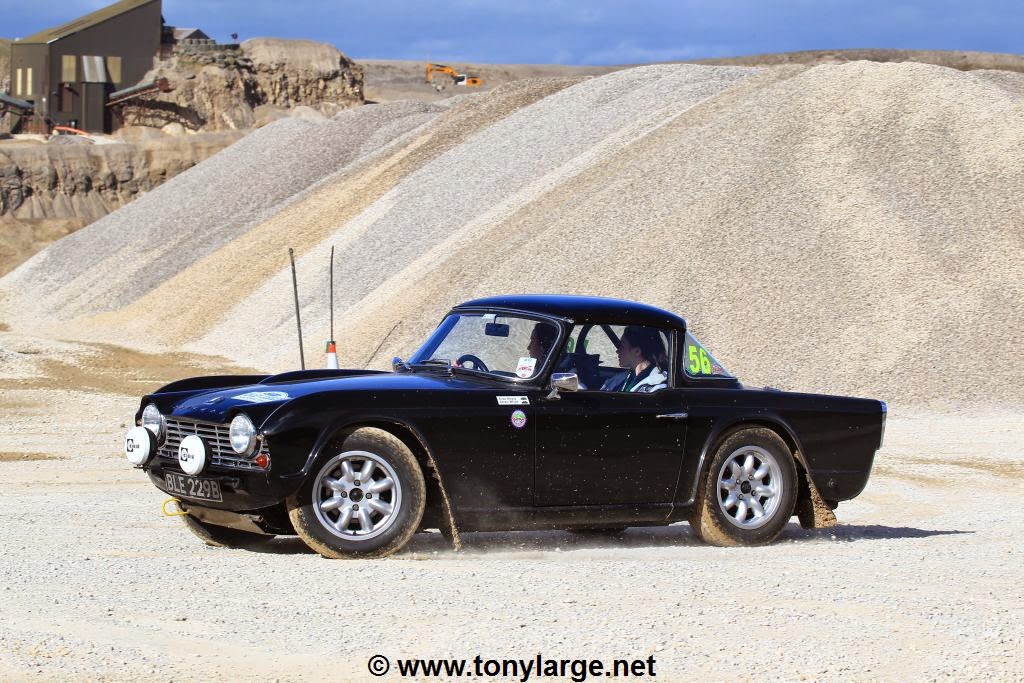 Test six was a great test that I really enjoyed, at Coldstones quarry, a long fast test with multiple slaloms, which the TR4 handles really well. I thought we had a good time but again we were one of the slowest cars through.

Regularity four was our best regularity, we were handed the instructions at the Main control so had a couple of minutes to plot before reaching the reg start. We hit the timing points eight seconds early, eleven seconds late and then one second early. This may have lulled us into a false sense of security as it was straight into Regularity five another plot and bash. 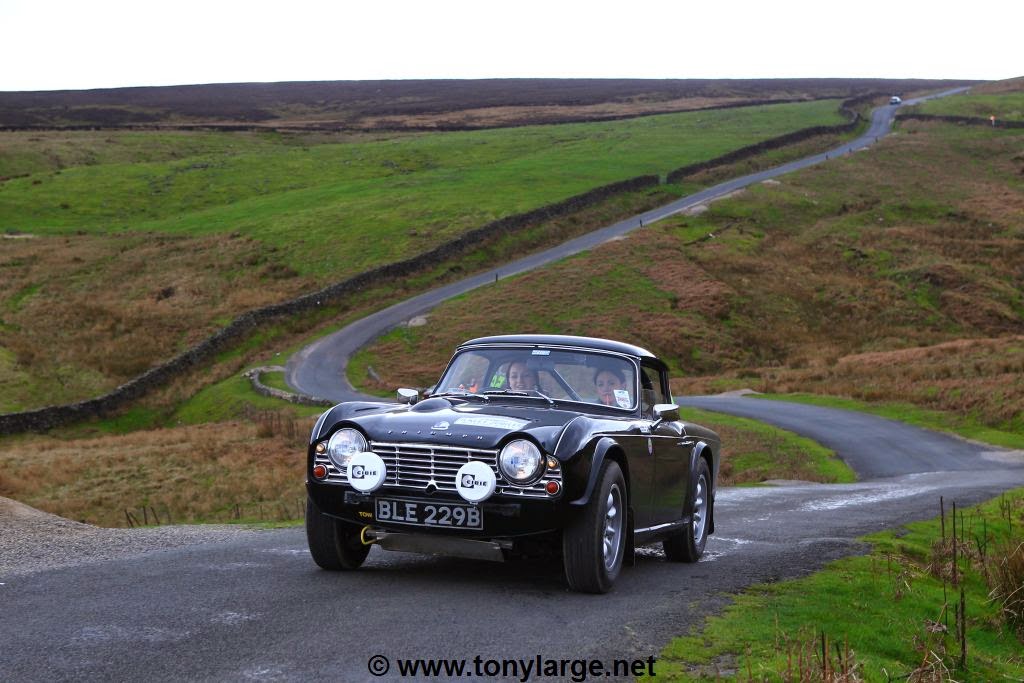 As the instructions to this regularity were handed over I heard Elise groan, it was tulip diagrams with no distances, our nightmare from the previous rally was beginning again. We began ok but misread a tulip because it didn’t seem exact enough for the junction, Elise even double checked it with me and we decided to go straight on where we should have turned left. Eventually we realised and turned around but we got the maximum penalty of one minute at the control, 200m from the junction in question.
Three more tests back at the quarry followed, with one of them in the quarry itself. It was great sliding around but unfortunately I stalled off the start line, rather embarrassing, so our time was terrible. The next test we got to do twice, it was practically test six in the opposite direction, with fast times and slaloms through cones, our times were 38 over bogey the first time and 33 the second.

The last regularity of the day went very well, we actually managed to clear a timing point, then we were four early and 23 late. Before we knew it we were on the last test at Scargill reservoir, slightly different as we got to drive in convoy through the test slowly in reverse before turning around and driving it for real. Then it was onto the finish. 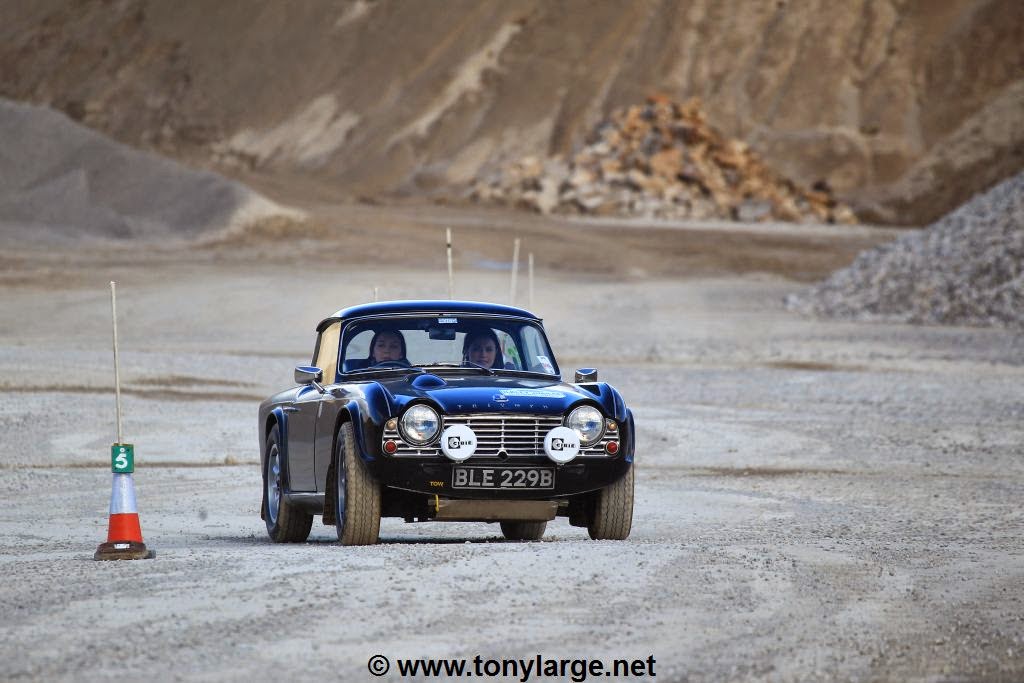 Unfortunately with a five hour drive and work the next day we had to load the TR4 onto the trailer and leave straight away, we were on the M5 when someone kindly messaged us with the results. We were very surprised to find out that we had finished 46th overall and first in our class!

Another great one day event and definitely on the calendar for next year !